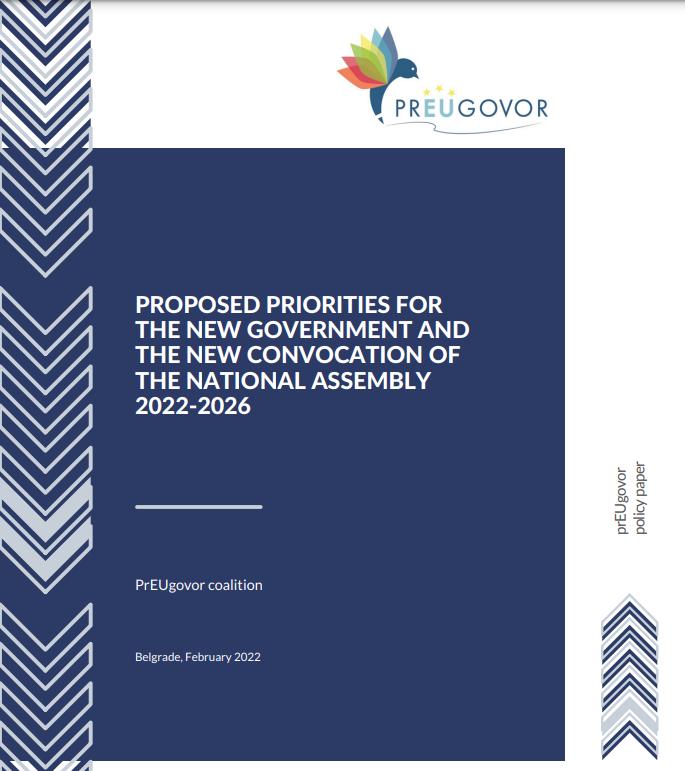 In the new prEUgovor publication, we have collected the key reforms that should be prioritized by the new executive and legislative branches which will be elected in the upcoming elections on April 3. In addition to the general principles that are important for improving the current state of the rule of law and democracy in Serbia, the coalition members highlight, each in its field of expertise, the key issues in the fight against corruption and organized crime, anti-discrimination policy, migration and asylum., combating human trafficking and regional relations.

The coalition starts from the belief that reforms in the areas covered by Chapters 23 and 24 (rule of law, security) of negotiations between Serbia and the EU are a matter of undoubted public interest, both in the context of Serbia’s European integration and, even more, from the point of view of Serbian citizens. It relies on the long-term work of the members of the coalition prEUgovor in these areas and the mechanisms that were recognised at the international level as being high quality and effective. Respecting the differences that exist among the political actors on other issues as well as international obligations of Serbia and adopted strategic acts, coalition prEUgovor calls on the Government and National Assembly to include the following points in their programme of action, and on all active political groups to accept the presented priorities as their own, or state the reasons why they oppose them.

PrEUgovor stresses that aAction plans in the field of European integration should be used as an incentive to accelerate reforms, and not as justification for postponing or not resolving problems identified in Serbia that were not highlighted by the EU as a priority. On the other hand, the findings from EU bodies’ reports on weaknesses in the rule of law and decisions that slow down Serbia’s negotiations with the EU should be used as an incentive to improve the situation.

Among the general priorities explained in the publication are the following: