Human stories about the importance of support, solidarity, difficulties and small victories

During the implementation of activities and distribution of assistance, colleagues on the field encountered different stories, which are proof to all of us that the activities and changes we initiate have a positive impact on individuals and social groups who need help in such a crisis.

We share some of the stories with you. Talking and working with marginalised people and people in need cause tears and smiles at the same time, as well as additional empathy and motivation to continue to spread humanity and solidarity. Such stories are proof that what is insignificant to one person is valuable to another.

The largest family in Serbia

The Centre for Social Integration from Vranje, a partner organisation of the Ana and Vlade Divac Foundation, provided support in the distribution of 50 aid packages in the form of food and personal hygiene items distributed to families from socially vulnerable categories of the population.

The Ljubisavljević family, who live in the village of Stropsko near Vranje, is one of the largest families today, not only in the Vranje region, but in the entire Serbia. Thirteen children live in a small house. Father Dragan works mostly on construction sites, while mother Dragana spends her days at home with the children.

Surprised that someone remembered them during the pandemic, Dragana thanked them warmly for this small but important help. As she says, any help is welcome.

“We have a hard life. We manage as best we can and know. The children are well, thank God. They take care of each other, they go to school regularly. They share clothes. I am sorry that we are not able to provide them with much more. We can barely manage to provide them with food”, Dragana explained.

While she invites the children to take photos, the six youngest ones sit next to her, the older ones complain from the room whose window is covered with a cloth. “We don’t want to be photographed”, they say. Dragana says that they are ashamed to be photographed in such poverty.

“Thank you very much for this help and let us know if you’re sharing anything again”, she says. 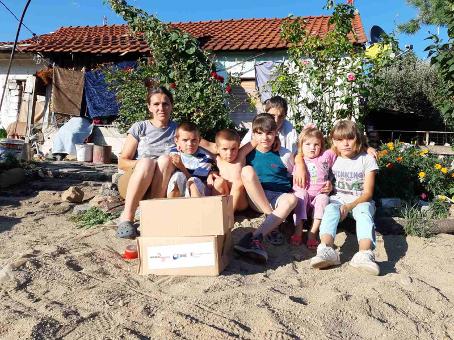 Novak hopes to gain his sight, to be able to learn and to play freely with his peers

Society is judged by how it treats and shows compassion for those who cannot take care of themselves in difficult times. In the poorest village of the poorest municipality in Serbia, volunteers from the Association of Refugees, IDPs and Returnees “Otadzbina” from Kursumlija met little Novak. The village of Rudare near Kursumlija is located near the administrative crossing with Kosovo.

We met Novak during the Christmas holidays at the beginning of 2020, during the distribution of humanitarian packages. After all the other children took the presents and left, Novak, who was there with his father, approached us. He had impaired vision, and our team noticed other health problems as well. Our youngest volunteer, eight-year-old Danilo, handed him a gift, they hugged and greeted each other. His father, a man who had dedicated his entire life to caring for his son, took our team aside and talked about his problems.

Novak has only 5% of eyesight in both his eyes, and the treatments by specialists have financially destroyed this family. The boy, the same height as Danilo, is in the fifth grade and has to walk 5 kilometres alone to get to school every day. We later learned that Novak’s mother had left the family, while our volunteers personally saw the poor condition of their home, which resembled a garage.

Novak told us that he loves football – he is a Red Star FC supporter, despite the fact that he does not see well, he is obsessed with collecting pictures of players. When he grows up, he wants to become a professional musician and play the accordion. Novak and our little volunteer Danilo continued to hang out and Danilo promised to bring him more pictures of players and more gifts. During 2020, with the support of the Embassy of the Kingdom of Norway and Group 484, we took more gifts to Novak. Assistance and support packages have reached him and he is grateful from the bottom of his heart, with a desire to get better quickly so he can learn and play with his peers.